Publicly Proclaiming the Glory of God in Cambridge

By Charles Kelley with Natalie Meeks 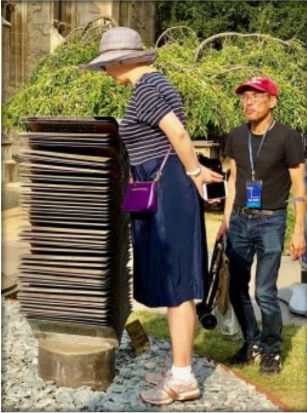 Inspired by the five “Solas’ of the Reformation (sola scriptura, sola gratia, Solus Christus, Soli Deo Gloria, and Sola Fides), Archetypes a six month exhibiton situated opposite the iconic King’e College Chapel.  The exhibition invites visitors to reflect on the conversation between history, faith, and contemporary art. Charles Kelley speaks of the impact of this exhibition.

A Chinese scientist and his non-English speaking family approached, looking at the objects from afar.  “Come closer,” I  called to the man.  “Look at this book.  It’s unlike any other book you’ve ever seen. It speaks to you and it reads you –come and take a look.”

He translated my invitation to his family. Very slowly, his wife approached and paused before the sculpture of the Bible – The Book that Reads You. Cautiously, carefully she inched toward the shining book of brass and peered down, the open pages meeting her at shoulder level. “Do you see the eyes?” I asked. “This is the only book that is alive and reads us. As we read it, it reads us.” I continued, “The Bible is alive. It has hands… it reaches out to us; it has feet… it chases after us; it has a voice… speaking to us; it has eyes… it looks into our hearts.”

The Lamb of God sculpture is made entirely of shapes like eyes, with a mask-like head set on the majectic body of a ram.  A closer inspection reveals a great nail buried deep in its breast. “You can touch the Lamb,” I encouraged the children. I explained to them what it means to be the lamb of God, the love of Jesus, and the story of that most crucial sacrifice which made it possible for our sins to be forgiven. 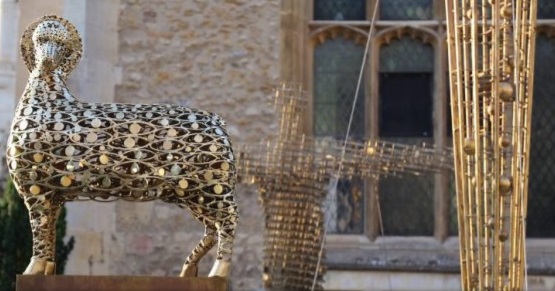