The church operates near an international university in a western suburb of Jakarta, Indonesia. In the basement of a high-rise condominium directly across the street, the student ministry team has set up an environment for students to study and hang out in between their classes. The “Study Bunker” is available throughout the week but isn’t just for  studying. It’s also a gathering place for students to come and take a break from their intense study   routine, whether it is conversations with one another, enjoying a games night, or watching videos, either a movie or whatever they find on YouTube. 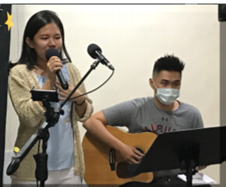 Our creative arts ministry partnered with our students team to co-host an open-mic night for anyone  interested and familiar with the study bunker. The word got out to those involved inviting students, friends, and members from our church to submit performances to share during the evening.

There were 7 acts that made up the evening’s program.  The program included covers of worship songs along with traditional contemporary songs from Indonesia that students wanted to share. One friend of the ministry is an Indonesian songwriter and rap artist. Two students share a traditional Dayak welcome dance for everyone gathered for the evening. From the 20 or so people who attended, there was a 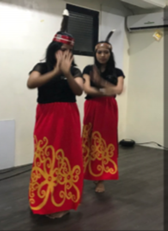 boisterous and lively   atmosphere throughout the evening. Refreshments were available and    plenty of opportunity to interact with the performers during the two  intermissions. Photos were taken and shared. New appreciation for the talents among the students and the heart behind what they had to share prompted deeper conversations. These open-mic cooperative events are expected to continue in the months to come. They are providing alternative atmospheres for the study bunker that will invite other students to take  advantage of the space and build relationships with their peers. 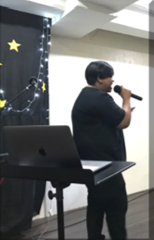 The goal of the student ministry is to prompt discipleship relationships to form among those who get involved in what the study bunker has to offer.